SteamVR Controllers are the official Input Device for SteamVR and HTC Vive. The device came to life as a result of Valve’s partnership with HTC. Their new VR device, HTC Vive, is composed of three distinct units: the headset itself, two SteamVR Controllers, and two base laser-tracking stations. All of these devices work in tandem to provide users with a very realistic and accurate VR experience, however, it is the pair of hand-held controllers that offer the most versatile options for interacting with virtual worlds and objects. Their latest version has been unveiled at CES 2016, and it features a significant design and construction improvements.

The original version of SteamVR Controllers had a very distinct shape because of the very unusually shaped head of the controller, which houses multidirectional laser tracking sensors. The latest version features a streamlined design and a doughnut shape top that seamlessly blends in the hand-held portion of the controller. They come with a high-precision trackpad on each one of them that is similar to Valve’s Steam Controller, and it can be used as a traditional analogue stick for movement or for interacting with in-game objects. The single dual-stage trigger button works as expected and the controller provides a sufficient amount of ways how players can engage with various VR experiences. And finally, there is a home button for system and menu navigation. Steam VR Controllers provide users with haptic feedback to let them know when a specific action has been completed.

The already mentioned head of the controller interacts with dual base stations that are placed in opposite corners of the room. This system is optimized for sub-millimeter positional tracking with latency counted in single milliseconds. It is possible to move in spaces up to 15 feet by 15 feet, which is enough for smaller demos that operate in a limited space. In practice, users of SteamVR Controllers will not notice their strange shape because they will transform in whatever virtual object they are supposed to represent in virtual reality. Demonstration of HTC Vive showed how SteamVR Controllers can be turned into virtual paintbrushes, a pair of hands, or hands with guns in a game called Arizona Rising, which is a zombie shooter with a very deliberate pace and a good usage of 3D audio for giving players timely cues about the location of enemies. Chunks, a Minecraft-style world-builder, also showcases how some games could potentially with the problem of locomotion in virtual spaces. The game uses one joystick to act as a pointing device for teleportation. Players can not only choose where they want to be transferred to, but they can also choose the scale of their avatar. This enables a quick and convenient way of moving around the map and the variable perspective enhances Minecraft’s building experience.

The latest version of HTC Vive prototype controllers operates completely wirelessly, have no problems dealing with occlusion and are able to quickly reconnect in the rare case of complete connection loss. The built-in battery is able to last up to 4 hours, compared to just two of the previous version. Valve has managed to transfer the mouse and keyboard experience from PC to virtual reality and thus open a large bag full of possible future applications. The consumer edition of HTC Vive is expected to start shipping later in 2015.

Since the controllers require their users to firmly grip them the whole time they are using them, it is not possible to perform any gestures that involve fingers and thumbs. 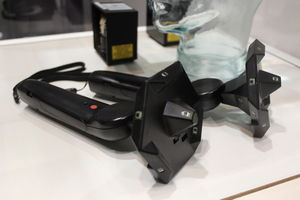 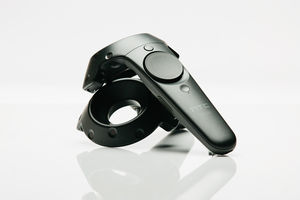