Oculus Touch also known as the Half Moon is the first unique Input Device for the Oculus Rift. Acting as your hands in the virtual world, Oculus Touch consist of two mirror-image controllers, one held in each hand. These wireless controllers are motion tracked by the same Constellation tracking system that tracks the Rift HMD. Oculus Touch has traditional gamepad controls such as analog stick, buttons and triggers along with the abilities to detect hand gestures and provide haptic feeback.

On October 11, 2017, during the Oculus Connect 4, Hugo Barra, Oculus' Vice President of Virtual Reality, announced the permanent price reduction of Oculus Rift and Touch bundle to $399.

In July 2017, the price of Oculus Rift CV1 bundled with Oculus Touch was reduced to $499. Note that the bundle does not come with the Xbox 360 Controller nor the Oculus Remote, but it does come with 2 Oculus Sensors.

Touch ships with an Oculus Sensor for 360 degrees VR experience. Additional sensor can be purchased from $79 for Room-scale VR experience.

One wireless Oculus Touch is held in each hand. 2 Oculus Touch controllers are designed to operate simultaneously. Some of the controller's features are similar to that of a traditional gamepad. It has 1 analog stick and 2 buttons on top and 2 triggers, 1 for the index finger located in front and 1 for the middle finger on the side. Additionally, the controller features capacitive sensing. Every input on the device, besides the side trigger, can sense the user's touch.

Oculus Touch achieves high precision, low latency, 6DOF tracking through the same Constellation tracking system as the Rift headset. IR LEDs are placed on the controllers' bodies and rings, allowing them to be tracked by the same positional tracking sensor(s) that tracks the HMD. The LEDs on the outer rings prevent occlusion caused by your hands. In addition to positional tracking, controllers possess built-in IMUs that allow rotational tracking.

The device has a matrix of sensors mounted inside that keep track of your fingers and detect hand gestures. The only 2 fingers that the controller do not detect are the pinky and the ring finger.

When you hold the controller, your hand is in a comfortable natural resting position. When you grab something or pick something up in VR, you activate the side trigger with your middle finger and grip of your hand becomes tighter. It simulates the natural motion of grasping an object in real life.

Battery - 30 hours without haptics and 20 hours with haptics on a removable and rechargeable AA battery.

First Contact - 80s sci-fi throwback tutorial app that shows the player how to use Touch.

Touch SDK - includes API’s for determining the position of the controllers, recognizing hand controllers, and driving the haptics avatar hands. These will be fully integrated into Unity and Unreal with sample code. 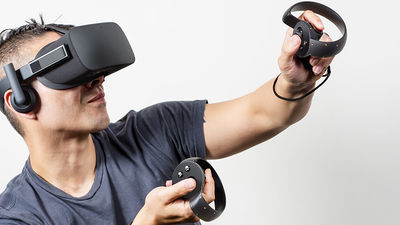 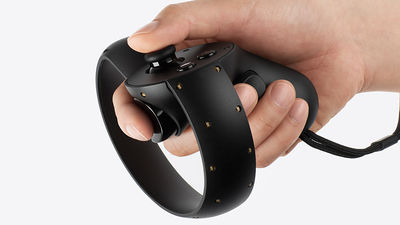