This page is a stub, please expand it if you have more information.
HoloLens Clicker is the Input Device for the Microsoft HoloLens. Developed by Microsoft, the small remote has a single button along with rotational tracking. It allows a user to click and scroll with minimal hand motion as a replacement for the air-tap gesture. 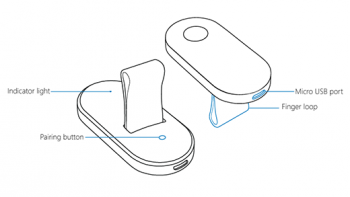 The HoloLens Clicker is a peripheral device for Microsoft HoloLens (figure 1) [1]. It was designed exclusively for that augmented reality (AR) device, allowing for another way to control and interact with the holograms displayed by the AR headset [2]. It is a miniature controller that lets the user click on whatever he or she is looking at, since there is a small dot in the center of the user’s view functioning as a cursor. Hand motion is used for the drag and drop command, since the Clicker has motion sensors on board [3]. The user clicks and holds with the Clicker, and then slowly moves the hand to drag objects. This function is mainly used for resizing windows and holograms as well as scrolling up and down documents in Edge [1] [4]. It also makes typing an easier endeavor, where the user can look at the letters in the keyboard and click on the device to select them. The HoloLens Clicker can be used in addition or instead of the “air-tap” gesture [3]. 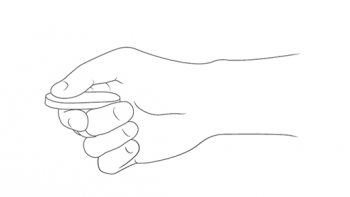 The Clicker attaches to the user’s finger via an elastic strap (figure 2). It uses Bluetooth and its design aims for simplicity [4] [5]. It only has one button, and is charged over Micro USB [6]. The first details for this device emerged in February of 2016, when a leaked quick-start guide was posted by Twitter user WalkingCat [2] [6].

The HoloLens interaction model has, in general, three key elements: Gaze, Gesture, and Voice. The Gaze relates to what you are looking at (e.g. headtracking), the Gesture is an “air-tap” movement that the HoloLens will recognize and allow for selection of items, and Voice that allows for voice commands. Even though the gestures work well on HoloLens, and the voice commands are reliable, there have been reports that it may become inconvenient for some users to use them over and over again during a short period of time. Indeed, Jared Petty from IGN reports that even after practicing the “air-tap” gestures, preference went to the Clicker since it provided tactile feedback that made the interactions with the holograms feel more precise [5]. The HoloLens Clicker is, therefore, a way to solve this and give users another option to control the holograms in the AR device [4] [7].

Compared to other headsets, like the HTC Vive, Oculus Rift, and PlayStation VR, the HoloLens Clicker controller is the simplest and smallest of the peripherals. Due to its small design, it is intended primarily for navigation and not for use in precise application such as gaming. This device is the only controller that has been unveiled for the HoloLens, for now. A more complex controller may be in the works [4].

A Development Edition of the Microsoft HoloLens has been released, which includes the Clicker peripheral [1].

Select - To select a hologram, button, or other element, gaze at it, then click.

Click and hold - Click and hold your thumb down on the button to do some of the same things you would with tap and hold, like move or resize a hologram.

Scroll - On the app bar, select Scroll Tool . Click and hold, then rotate the clicker up, down, left, or right. To scroll faster, move your hand farther from the center of the scroll tool.

Zoom - On the app bar, select Zoom Tool . Click and hold, then rotate the clicker up to zoom in, or down to zoom out.[2]

Blinking white - The clicker is in pairing mode.

Solid white - The clicker is charging.

Blinking amber - The battery is low.

Solid amber - The clicker ran into an error and you'll need to restart it. While pressing the pairing button, click and hold for 15 seconds[2]