HTC Vive Pro (also known as HTC Vive 1.5) is the 2018 update to the first consumer version of the HTC Vive (Platform) Virtual Reality HMD developed by HTC. It is part of the SteamVR ecosystem created by Valve. Indeed, it was the partnership between the two notable technology companies that led to a quality product and made possible the integration of the VR headset with the SteamVR platform. [2]

Pre-orders for the Vive Pro have not yet begun nor has the final pricing been announced. It is proposed to sell just with the head-mounted display (HMD) as an upgrade to existing owners, or alternatively as part of a kit, potentially with two wireless motion tracked controllers and two lighthouse Base Stations positional sensors that enable room-scale VR.

The HMD is sleek and sturdy, with blue highlights and is lighter than the original, non-Pro version. It is secured to the user's head with a harness-like series of straps. The user's face contacts the HMD with a soft and comfortable facial interface. The foam gasket part of the interface can be removed and replaced by lifting it from the velcro. The user can change the distance between the lenses to fit his IPD (Interpupillary Distance) with the dial on the right side of the HMD. Eye relief, the distance between the lenses and your eyes can be adjusted to extend or retract the sides of the HMD. While this function allows the Vive to accommodate most glasses, it has to be noted that increasing the eye relief does negatively affect the FOV (Field of View).

The Vive features dual OLED panel displays of 1440 x 1600 per eye. The colors are vibrant, the resolution is adequate and the screen door effect is significantly reduced with the 78% increase in pixels. God rays are caused by Fresnel lenses' ridges which scatter light. They look similar to lens flares and are noticeable whenever there are high contrast elements on the screen i.e. white text on a black background. How significant God rays are in the new Vive Pro display and optics system yet to be evaluated.

Dual cameras are located on the front of the HMD. The camera can bring up a wide FOV of the environment that is in front of you. Players can activate the camera by double tapping the SteamVR controller's "System" button or set it to automatically activate when you wander too close to the Chaperone boundaries. Working in conjunction with Chaperone, the camera creates another layer that keeps the player safe while moving around wearing the HMD.

Tracking in Vive has no visible latency. The tracking system employed by HTC Vive is called Lighthouse. While rotational tracking is achieved with IMUs (inertial measuring units), positional tracking is accomplished with two IR (infrared) Base Stations. The Base Stations constantly flood the room with IR that is detected by sensors on the HMD and SteamVR Controllers. The HMD and controllers' position in relation to the Base Stations is then obtained (inside-out tracking). The Vive's tracking is designed for both seated, standing, and most importantly Room-scale VR experiences.

The HTC Vive headset is designed to accurately track the position and orientation of the HMD and controllers within a space (size to be confirmed).

SteamVR Performance Test is a benchmark software that checks if your system is ready for the original Vive. It checks your system's OS, GPU and CPU to see if it has the capability of running VR at 90 FPS and whether VR content can tune the visual fidelity up to the recommended level. To be confirmed if there are any tools to check for compatibility with the new HTC Vive Pro.

The play area sets the virtual boundaries of the HTC Vive. The interaction with VR objects happens within the play area.

For Room-scale VR, it is required a space where the user can move freely.

NOTE: TBD what the tracking area is with the new Lighthouse 2.0 Trackers.

Putting the HMD on

Adjust Eye relief: Eye-relief is the distance between the lenses and your eyes. Keep the lenses as close as possible because increasing the eye-relief lowers the field of view. Only increase it if you really need to, such as fitting eye glasses. You can adjust your eye-relief with the two large, circular knobs on the sides of HMD. Pull the knobs out then rotate them to increase or decrease the distance. Press them back in to lock the HMD in place.

Replace face cushion: If the face cushion is too wide, replace it with the thin cushion. You can exchange the cushions by peeling the velcro off from the two ends.

Charging: Charge the Controller with the microUSB cable and/or power adapter. You can check the battery level of the controllers when no apps are running, or when the System Dashboard is up.

Pairing with HMD: Controller pairs with the HMD automatically when it is on. To manually pair, launch the SteamVR app, tap Down, then select Devices, and finally Pair Controller.

Updating Firmware: When SteamVR notifies you about outdated firmware, connect the controller to your PC with the microUSB cable to update automatically.

Placing the base stations

SteamVR Controllers - One held in each hand. These controllers are tracked by the same system as the HMD (Lighthouse).

Other devices compatible with Steam

HTC Vive Apps The Lab by Valve is available for free to all Vive users.

Connecting to Your Phone

Users can install the Vive mobile app on their phone from the App Store [3] or Google Play[4]. The apps enable the HTC Vive HMD to connect to mobile phones through Bluetooth. It allows the Vive HMD to receive calls, texts and calendar reminders while the user is in the VR experience.

To make phone calls, users need to download the Vive software package [5] for their PC. Now when they receive a call or text, they will be able to call back the individual through the Vive menu. 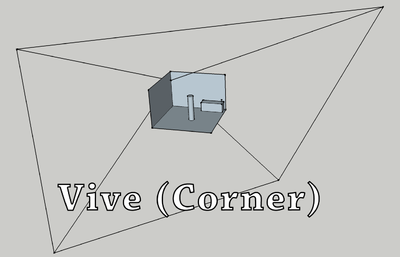