Daydream is a Virtual Reality head-mounted display developed by Google for Daydream Platform. To use Daydream View, users need to mount a Daydream ready Smartphone inside it. The smartphone serves not only as View's screen but also as its processor and tracking device. For input, Daydream View has a small, remote-like controller with rotational tracking (3DOF) built-in. Neither the HMD nor the controller possess positional tracking.

Daydream View consists of a plastic body wrapped in soft and cushy fabric. The HMD fits over most eyeglasses and the outer fabric is removable and washable. The overall feel of the HMD is simple and light without being cheap. It comes in 3 colors: slate, snow and crimson.

Unlike Gear VR, which has IMUs, fans and microUSB port, Daydream View has only lenses and a NFC tag concealed within the front cover. The HMD does not need to be connected to the phone, the NFC tag detects the phone when it is in place. View not only relies on the phone for processing but also for tracking (3DOF).

The front cover of the HMD is mostly open. It relies on a spring-loaded hinge below, an elastic hook above and few high-friction pads to keep the phone in place. This method allows the HMD to be compatible with phones of various sizes and thicknesses. Additionally, there are 2 black capacity pads that touch the phone's screen. The HMD detects when the phone is in place and these pads adjust the screen to the correct position.

Unlike many other HMD, Daydream View does not have a top strap. It has 1 strap that goes horizontally across your head. It does not use velcro, instead the HMD uses plastic loops to adjust, tighten and loosen the straps.

Light leak and lens glare are two of the problems with the Daydream View. Because the HMD is designed to accommodate phones of various sizes, light from external environment can enter the HMD from the side of lenses. In scenes of high contrast such as white objects on a black background, you'll see thin layer of light around the edges of your view.

Screen door effect is less noticeable on View than on Rift or Vive. Black smear, dark areas of the screen that smear across light areas during head movement, occurs due to OLED’s inability to change true black pixel colors very rapidly.

Daydream Controller is a small, remote-like device with rotational tracking (3DOF). It allows the user to intuitively point at objects in VR with a mouse cursor. In addition to 3DOF tracking, the controller has a trackpad and 2 round buttons on top and 2 volume buttons on the sides. The controller is wireless and is recharged through a USB-C cable.

Setting up the HMD is very easy. 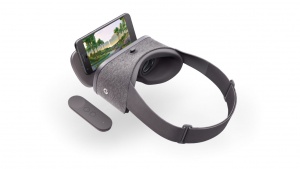 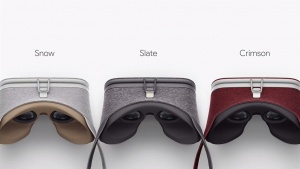